So Hard to Say Goodbye 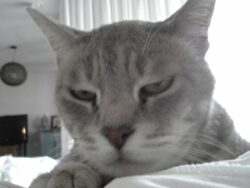 (If you’ve never loved a pet, this story will mean nothing to you. If you have, you’ll understand. Names have been changed to protect privacy.)

I knew the grief was coming. I knew what to expect. It still took me by surprise.

For years I dreaded the phone call. Last Saturday it came. My ex-girlfriend Jen rang to say her cat Alfie had died. She went to bed Friday night and the next morning she found he’d died peacefully in his sleep, lying in the little round, fur-lined bed he liked so much.

Alfie. The cat who jumped into my arms the first day I met him. The cat with the loudest purr in the world, who loved people and was curious about everything going on around him. He lived to 16, now he was gone.

I don’t intend to write about Alfie’s unique personality, but the emotional process of dealing with his loss. The first night I was OK. Numb, then more numb as I drank alcohol to ease the pain. There was even a small sense of relief because what I’d feared had finally happened, so I didn’t have to fear it anymore. Then gradually over the next few days, the grief came on in waves, some gentle, some more intense. For years I knew this was coming, yet it still caught me in an ambush.

One of the hardest parts of breaking up with Jen was losing Alfie. I never lived with Jen. I’d stay over on weekends, then during the week I’d go there Tuesday night for dinner and some TV  before going home. It was a comfortable arrangement, happy enough for a couple of years, and for a while it felt like a home. Then we drifted apart, as people do. After we split, Jen was kind enough to allow our Tuesday nights to continue. That was pretty much about seeing the cat, and to some degree for his benefit as well as mine.

This stopped after a year, as Jen wanted to move on in her life. Fair enough. But I still got to have Alfie at my place for a week or two when she went overseas for work. Such a treat for both the cat and myself. It was always hard taking him back to Jen at the end, and each time I wondered if it would be the last. He was getting old.

The Monday after his death, I made a sad pilgrimage to collect a couple of keepsakes. Jen was at work but left them in the cafe downstairs. She also left a card for me. It said: “I am too emotional and sad to write much, sorry for that. All I really need to say is thank you for everything you did for Alfie. He loved you so much, and you made his life better.”

I cried when I read it. Alfie was like the innocent child in our break up. And while she stopped loving me, he never did. Perhaps that’s one reason a pet’s death is so hard to take. Because animals love with a simple devotion that people do not. While humans are tricky creatures with feelings subject to the ravages of time, animals love with a constancy most humans cannot attain.

Alfie died last Friday night, although I didn’t know until the next day. The night he died, I woke at 3.30am, restless and unable to go back to sleep. I got out of bed and lay on the couch in the living room, a breeze blowing across the room. I wonder if was then that his spirit came to say goodbye. Skeptics can scoff, I don’t care. I believe his consciousness will go on to other lives, other adventures. He had a hunger for experience, that cat. He was curious, playful, and loved people. While he did have a beautiful and comfortable home, I think part of him was a little bored and restless at times. Now he is free to roam; his spirit can go on to those new adventures. He will take with him the immense love Jen and I had for him.

But it’s so hard to say goodbye.

Grief is a strange thing. It can stop you in your tracks and make everything else seem irrelevant. Grief is the price you pay for loving a pet because one day they’ll break your heart.

I’d prepared for this day, even fictionalising it in my book, The Maelstrom Ascendant. He was called Finzi there, and both his death and resurrection were woven into the plot. In reality, you can prepare all you like but when the day finally comes, all you can do is endure it. The desolation, the nameless sorrow, the questions that can’t be answered. It’s made easier by the sympathy of others who’ve been through it too. When you hear their kind comments, it restores your faith in people.

Alfie. At the end of the day, I’m glad I knew him, and the pain of saying goodbye is a price worth paying. I’m comforted to know I did everything possible for him. As Jen said, he loved me and I made his life better.

The Buddhists speak of impermanence: everything in life passes and dies. For what it’s worth, some feelings transcend death. The ephemeral and the eternal are one. 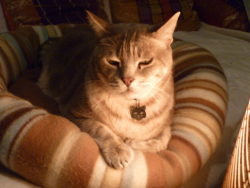 Footnote: It’s funny how at certain times in your life, a particular song will weave itself into your experience. For me, during the last week, it has been a song called ‘We Were Aborted’ by The Cribs. Not for the lyrics, just for the feel of the music. For those interested, go and listen to the original studio version on YouTube.

Here’s a video of a song I made 3 years ago featuring many photos of Alfie. It refers to the book The Maelstrom Ascendant, in which he appears as a character and is given the name Finzi.  https://www.youtube.com/watch?v=FWyfrtoLr2o