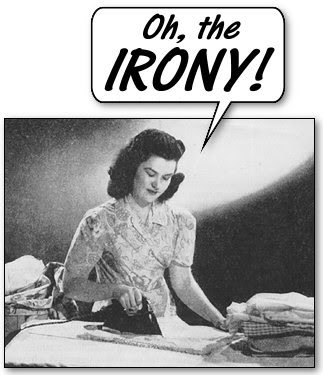 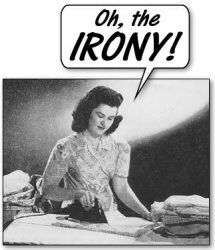 See, a lot of people think they’re too intelligent or cool to like some item of pop culture. But they do like it and that causes an existential crisis. If they like something uncool does that make them uncool too? The solution is to call it a ‘guilty pleasure’. As long as they confess guilt about liking it, they’re off the hook. Which is a relief, because the most important thing in life is being cool, or so they think.

Your coolness is often judged on your clothing, speech and behaviour, but especially on your cultural tastes i.e. the kind of music, films, books etc you like. The problem is that many parts of popular culture aren’t considered cool at all, even though by definition lots of people like them. This is a dilemma for those who like uncool things but want to be seen as cool themselves.

People have now come up with a solution to this devastating social problem. It’s related to the ‘guilty pleasure’ solution, but taken up a notch or two. The solution is liking things ironically. It’s a strange concept but as far as I can tell, what it entails is you’re allowed to like something as long as you make it clear that you actually regard it with the utmost scorn and derision.

For example, back in the last century a friend and I went to a vampire movie. This was before various books and TV shows made vampires cool. It was a good film and the vampire genuinely frightening, but every so often my friend let off a superior chuckle just to assure me that she knew what rubbish the film was. In those days, sophisticated adults weren’t supposed to like vampire movies. I suppose she was liking the film ironically, even though the phrase hadn’t yet come into vogue.

Liking things ironically is a new, updated version of the ‘guilty pleasure’ concept. The classical musician who likes Abba; the literary critic with a secret stash of whodunits; the aesthete who watches a bit of ‘trash TV’ at the end of the day. Why should these people feel guilty about such pleasures? Because liking these simple entertainments threatens their image as people of impeccable taste and refinement, or their position on the cutting edge of underground cool. If you consider yourself some kind of aesthete, intellectual or purple haired indie, then your liking for mainstream fare may bring an awful dose of self doubt and thoughts of ‘oh my god, am I really a commoner?’

It seems culture isn’t just something to be enjoyed, it is a social marker. If you want to be thought urbane, arty or cutting edge, you need to show conspicuous consumption of culture which are also urbane, arty or cutting edge. If what you really like are simple entertainments like rom-coms, disco music, or whatever, then you are outing yourself as a simpleton of the highest order.

And that’s the beauty of the ‘ironic’ solution. The brilliant aspect of liking things ironically is it’s a blank cheque to do or like whatever you want. You can dress up in the daggiest clothes and as long as it’s done ironically, you’re off the hook. You can like any old film, TV show or music and as long as your irony is made clear, you’re not kicked out of the cool club.

It’s important though to make it clear that you are doing it ironically. By all means like any aspect of pop culture you want to, but from time to time you must affirm that you actually regard it with the utmost scorn and derision. If you don’t, people will have grounds to suspect that you actually like it, rather than pretending to like it while really hating it as beneath you.

It’s very complicated, isn’t it? No wonder everyone has struggled to navigate this social maze. However, not everyone has gone down the ironic route. There have been other solutions. Some people have taken the innovative step of liking things straightforwardly rather than ironically. This is shown by the rise of ‘geek’ culture, in which comics and science fiction, for example, have been openly celebrated. A spokesman for the movement, Simon Pegg, says:

Being a geek is all about being honest about what you enjoy and not being afraid to demonstrate that affection. It means never having to play it cool about how much you like something. It’s basically a license to proudly emote on a somewhat childish level rather than behave like a supposed adult. Being a geek is extremely liberating.

Note the word liberating, a term more associated with the idea of coming out as gay. The new found celebration of something that in decades past was socially unacceptable.

Another solution has come from the academic world. With the invention of ‘cultural studies,’ the old distinction between high and low culture has been discarded entirely. By turning high brow thought onto low brow fodder, academics can now do whatever they want without fear of reprisal. Any part of popular culture is now fair game for study and analysis.

Yet for those who don’t identify as geeks or go to uni, and especially for ‘alternative’ types,  the best solution is still liking things ironically. It’s win-win. You get to openly like anything you want, and as long as you make it clear how much you actually hate and despise it, you can get away with it.

Liking things ironically? What a concept! Humanity – how do you come up with this stuff?

My opinion – in case you can’t tell – is that liking things ironically is for posers. It’s for insecure people with an excessive need for peer approval. But in fairness, I can’t claim immunity to this social pressure, at least in the past. It’s something we all go through in younger years and hopefully we grow out of it. But I also remember the stupidity of what actually was proclaimed cool or uncool by the great arbiters of taste.

A classic example comes from the field of music. I’ve been a heavy metal fan since about age fifteen. For much of the 70s and 80s, large sections of the music press saw heavy metal as uncool. The default tone when referring to metal was disdain, condescension, or outright rudeness. Metal was seen as crude and vulgar music for dumb, unsophisticated people. Being openly rude about the genre was so normal as to pass unnoticed.

This same music press, however, could barely contain their gushing admiration for punk which is on the whole a far cruder and dumber genre of music. But because punk was tied up in some kind of political ideal, it was deemed cool by the morons of the music press.

So whereas Black Sabbath, for example, were mocked and lampooned by the idiots in Rolling Stone magazine, the Ramones, Sex Pistols, and later Nirvana were all gushed over as gods, despite being far simpler than Sabbath. It was only after the likes of Nirvana and Soundgarden professed their love for Sabbath that the latter finally started to become cool again.

Liking Black Sabbath was a pleasure for me but never a guilty one, and certainly never ironic. In fact, I would nominate ‘liking things ironically’ for the Golden Wank awards. Liking things ironically is a fake way to live, practised by posers and poseurs! Yet in some circles it is apparently so common now that a writer named Christy Wampole has studied it and had to go looking for that enemy of irony, authenticity.

Where can we find other examples of non-ironic living? … Non-ironic models include very young children, elderly people, deeply religious people, people with severe mental or physical disabilities, people who have suffered, and those from economically or politically challenged places …

Observe a 4-year-old child going through her daily life. You will not find the slightest bit of irony in her behavior. She has not, so to speak, taken on the veil of irony. She likes what she likes and declares it without dissimulation. She is not particularly conscious of the scrutiny of others. She does not hide behind indirect language. The most pure non-ironic models in life, however, are to be found in nature: animals and plants are exempt from irony, which exists only where the human dwells.

Wampole is right. The pose of irony is a purely human affliction, infecting those from teenage years to adulthood. It’s only the old or very young who don’t care what others think. Young children have not yet learned to care what others think of them and the elderly can no longer be bothered.

When it comes to cultural life, you either like something or you don’t. You can’t like something under the guise of hating it. Not unless you are a complete poser, anyhow.