Most of the best blogs have a theme or a snappy title. My girlfriend came up with a great title – ‘Sir Rants a Lot’. She thought this would reflect my habit of going off into impromptu rants on various topics. But a google search showed that Sir Rants a Lot was already taken. Damn!

Then I was going to use ‘Anything Goes.’ That was the title of a jazz song from the 1930s. It also describes the scope of this blog. No subject will be off limits. Anything can come under discussion as long as it will draw a laugh, a sigh, or a raised eyebrow. My main intention will be to comment on the never-ending strangeness of the world and human behaviour.

But of course ‘Anything Goes’ has also been used. So for the time being, this blog will be called ‘Sparks’. The entries in this blog could be any kind of spark – a spark of wit, anger, amazement, humour, or just an idea. Some of these sparks may fizzle out but others will burst into flame and turn into something new.

Because this website was formed around the new book and album, ‘The Vortex Winder,’ this first blog entry will be a few words on what that project is about and how it began.

A few years ago, I got back into rock music after a break and formed a band called Lighthouse XIII. We made two CDs and they turned out well. When it came time to do the third CD, I was also trying to write a new novel and the thought occurred – why not try to combine them?

I wrote the story of ‘The Vortex Winder’ over about a year, as well as writing ten songs for the new album. Song titles and lyrics were inspired by events in the story, and the story itself also had an effect on the songwriting. Some songs had the same name as a chapter title (‘Black Art,’ ‘Trade Winds’), another was named after a character (‘Elijinx’) or even after the book itself (‘Vortex Winder’).

Some people have asked if they’re supposed to read the book while listening to the CD. Well, you can, but it might be a bit much to take in at once. It’s better to say that the book and music are complementary. They’re independent but linked, and each adds a new dimension to the other. 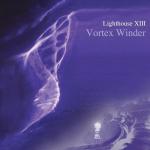 That there is a book behind the album adds some depth and meaning to the songs. With some songs out there, it’s hard to know what they actually mean. Everyone has had the experience at some point of wondering what their favourite songs are about. I mean, what the hell is ‘Stairway to Heaven’ about? Does anyone have the faintest idea? What is ‘Bohemian Rhapsody’ about? There are sites on the net where people try to decipher these riddles. Well, with the songs on ‘Vortex Winder,’ if you read the book at least you’ll have a fair idea what they mean.

It would be interesting to hear from people how they find the book and music fit together for ‘Vortex Winder.’ So far, some people are mainly into the book, some like the music, and others can get into both.

For my next blog entries, what you can expect is … just about anything. As long as it’s funny or interesting, it will meet the entry criteria for discussion on the vortexwinder.com. blog. It’s a case of seeing what sparks fly up from the volcano on any given day ….

Sign up for this blog, and expect the unexpected.