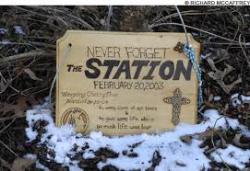 Warning – this story is not for the faint hearted.

When someone famous dies, we often see recent footage of that person on TV. It makes me wonder if they had any idea how little time they had left when the footage was taken.

I recently saw something quite shocking on YouTube. It must be one of the most haunting and macabre pieces of footage on that whole website. I’m surprised they’re even allowed to show it.

I found it after  reading One For The Road  by Mark Workman, a book about how to manage a rock tour. He mentioned in passing a nightclub fire that happened in 2003, in which over a hundred people died. It happened at the Station Nightclub in Rhode Island, USA. I was vaguely aware of the incident but had never really thought about it, so in a moment of idle curiosity, I googled it.

A video showed up in the search results. The link took me through YouTube to a scene inside a nightclub. I assumed it must be some stock nightclub footage or a re-enactment. But no, it turned out this was the actual scene from that night, of the fire starting. And as that realisation slowly dawned, I’m thinking ‘what the hell is this doing on here? How can I possibly be watching this?’

Turns out a local news guy was there that night filming for a story on – of all things – safety. So there it is on film. We’re in the club. The rock band Great White comes onstage. A jet of pyro is let off, igniting the flammable soundproofing material on the walls and ceiling of the club. The cameraman is one of the first to leave but continues filming as he exits the club. We see most of people in the audience still standing around, at first thinking the fire is part of the show, then that it will be quickly put out. By the time the camera guy has made it out the front door, the band has stopped playing and those people are about to make a stampede for the exits. What they don’t know is that there’s a ninety second window of opportunity to escape. Within two minutes, the whole place is ablaze, due to the highly flammable foam all over the club walls.

The video lasts for eight minutes, the last six of which are filmed from outside the club in the incongruous surrounds of a midwinter snowfall. I haven’t watched the video through to the end. Although no actual deaths are shown, it’s a piece so macabre it’s surprising YouTube is allowed to screen it.

But there is another video from that night considerably more haunting. It consists of footage shot by the same cameraman inside the club earlier in the evening. One would not normally use the word ‘poignant’ to describe scenes of rowdy rock revelry, yet that is a fitting word here. We see scores of people, mostly young, happy-looking, full of life and enjoying themselves with no idea death is so close at hand. We see couples, friends, bar staff and musicians having a night out at a rock gig in what may have been the highlight of the week for many of them. It’s hard to believe we are witnessing these scenes, in the grim knowledge of what is about to occur.

I became instantly transfixed by the whole story and ordered an e-book, From The Ashes by Gina Russo, a survivor. Then another one, Killer Show by John Barylick, a far more comprehensive account of the whole event. Each book was delivered instantly to my kindle and read at once.

Fascinated and appalled, I went back to watch the videos again, particularly the ‘before’ video. I became obsessed with trying to identify the people shown, matching them to those mentioned in the two books.

It turned out I was not the only one for whom the story had acquired a morbid fascination. There was an online chat forum created by other people haunted by this event. The forum featured lengthy discussion about the causes of the fire, the aftermath, what could and should have been done better, and how oneself would have behaved in such a crisis. But the principle obsession was identifying those people in the ‘before’ video. That is, in the ordinary scenes of revelry shot before the fire started. Comments are along the lines of ‘… and the guy at 2.37, could that be so-and-so? Or if not, who is he and does anyone know if he made it out?’ Or ‘the girl in the white dress holding the drink at 3.48, that must be so and so, who died.’

The next step was to go further back in time and find out who the victims were. To read their obituaries and their life stories. To find out what drove them and what they experienced in their short time on Earth.

The first thing to be drawn from the tragedy is of course to find out what caused it: the lack of safety standards in the club, the madness of letting off pyro in such a venue, the poorly planned exits, and so on. All of that has been discussed in great detail in Killer Show and online. To understand how it happened is to reduce the chance of it happening again.

Apart from that, this awful tale offers another message. It  is a reminder of the fragility of life itself – a point driven home by watching the ‘before’ video. Here we see young people vividly alive yet so poignantly close to death. We are fascinated by the tale – and also a little horrified by our own fascination. There is a morbid element to this type of curiosity about those who died so unexpectedly. We also realise that ‘there but for the grace of God go I’ (or my friend or my relative.) We’ve all been in nightclubs like that, never dreaming for a moment that they might not be safe. Nightclubs don’t burst into flames, do they? Well, I didn’t think so until now.

The 2003 Station nightclub fire was not the last such incident, which shows there is still more to be learned about safety. Killer Show is a worthwhile read for anyone designing or managing a nightclub. And the next time I go to a place like that, I’ll take a few seconds to see where the exits are.