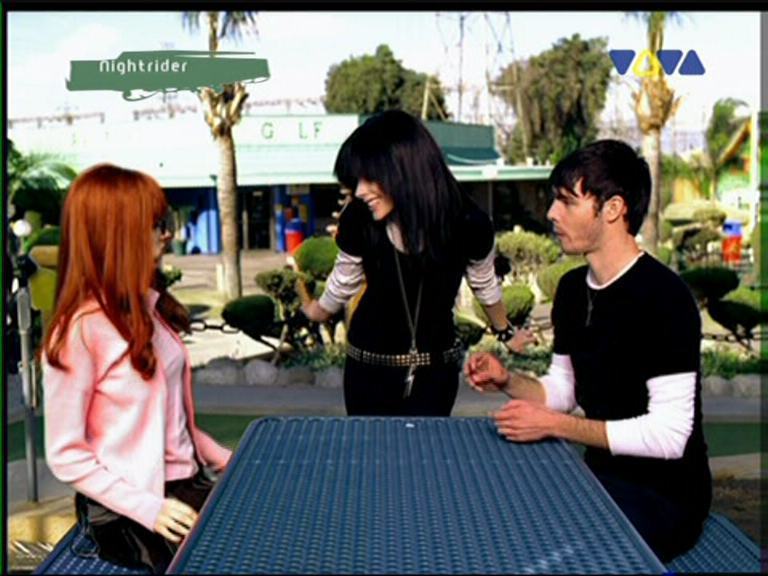 I teach guitar to a few kids at schools. Most of them are nice but a few years ago there was one who was a real little bastard. Rude, agro and borderline violent … and he was only nine.

A couple of terms after he quit lessons, I saw a ‘No-bullying’ poster on the wall at another school. There was a photo of an agro kid with a cross over his face and guess what? It was him. Looks like the kid found his calling playing the bad guy in an anti-bullying campaign.

On a much larger scale, the singer Avril Lavigne has also done her bit and produced a wonderful anti-bullying video for her 2008 hit, ‘Girlfriend.’ In a video just 3 minutes and 48 seconds long, Lavigne tells the story of a classic schoolyard love triangle. There’s a cool guy with a dorky girlfriend, and a cool girl who wants the guy. Let’s call the cool girl, Evil Avril.

Evil Avril is angry. In fact, she’s outraged, because the natural order of the universe has been perverted. Cool Guy going out with Dork Girl? It’s obscene and morally wrong. Besides, Evil Avril wants him, and what she wants, she gets – because in her own words, she’s the ‘motherfucking princess.’ That’s what she calls herself in the song. In American sports, the MVP is the most valuable player on the field. Evil Avril is something even better – the MFP.

To restore order to the universe, Evil Avril, launches a blitzkrieg against Dork Girl. By the way, how do we know Dork Girl is unworthy? She never speaks in the video, so it’s down to her looks. Lavigne plays both parts in the video. While Evil Avril has black hair and cool black clothes, Dork Girl has red hair and glasses. The only surprise is that Lavigne didn’t don the fat suit.

Most of the video is set at a fun fair – because teen romance is so much fun. In one scene, Cool Guy and Dork Girl are on the go karts and the MFP rams Dork Girl’s kart from the side. Dork Girl crashes into the wall and looks alarmed, MFP laughs maniacally.

In the next scene, Cool Guy and Dork Girl go into a photo booth. Evil Avril walks up with her two thug sidekicks and hauls Dork Girl out of the booth. She sits down beside Cool Guy and starts making out with him. The thugs stand guard outside so Dork Girl can’t get back in.

I might try that myself. Next time I like a girl who already has a boyfriend, I’ll walk up to them in public, violently assault the boyfriend, then start making out with the girl. Surely no one would mind.

Cool Guy doesn’t seem too upset. At no point does he defend his girlfriend or make any protest. Instead, he shows a bashful and sheepish delight in the attentions of the psychopathic Evil Avril. As he should – she is the MFP. At this point in the song, she orders him to make his girlfriend disappear and never say her name again. Thou shalt have no other gods than me.

Evil Avril is just warming up. In the next scene, she and her gang are playing mini-golf when they spot Cool Guy and Dork Girl on a green some distance away. Pointing and laughing at Dork Girl’s outfit, Evil Avril lines up a drive. With prodigious golfing skill, Evil Avril uses her putter like a wedge and sends the rock-hard golf ball in a looping arc that connects with Dork Girl’s head. In obvious pain, Dork Girl staggers around stunned, before collapsing face first into a pool of water. Evil Avril and her pals almost collapse too – with hysterical laughter!

The MFP then goes into a menacing rap in which she assures Cool Guy that he’ll soon be her slave and loving it. Check those lyrics!

Cut to a scene in a bathroom. Evil Avril and her cronies menace a couple of girls standing in front of the mirror. One is dressed in a checked skirt and has a bow in her curly hair, the other is an Asian with glasses. Nerds! What do they want with mirrors? Evil Avril threatens to punch one of them in the face and they flee.

Stand by for the coup de gras. We’re back at the mini golf after Evil Avril’s assault on Dork Girl. Cool Guy has finally caved to Evil Avril’s courtship and goes to meet her. A still dazed Dork Girl witnesses their joyful union. For some reason upset, she charges down the hill towards them but loses her footing and falls into a Portaloo, vacated only moments before by some obese guy. The Portaloo overturns and we see Dork Girl inside, clinging to the edge, an anguished expression on her face as she sees Evil Avril start to undress Cool Guy and take him into the bathroom, presumably to show what vastly superior blow jobs she’s capable of.

Evil Avril emerges from the cubicle to deliver one final triumphant fist pump for the greater glory of humanity – and the crowd cheers as the natural order of the universe is restored. The MFP has got what she wanted and Dork Girl is back where she belongs – wet, humiliated, and covered in crap from a fat boy’s arse.

Earthlings, we must rise as one and applaud the moral of the story. Pillage the weak. Vanquish the uncool. Take what you want by the divine right of being the MFP. All hail the Viking princess, Evil Avril who has sent the dork infidel back to her rightful place as an untouchable in schoolyard society. The untouchable who dared lay a hand on Cool Guy’s penis has been shown that the only bodily matter she’s fit to touch comes from that fat guy’s arse. This is the message imparted to the 250 million who’ve seen this clip on YouTube, at least half of them teenage girls.

But wait. Is that really the message of this video? No. Not at all. It may seem that way, but that would be a false interpretation, one that does Avril Lavigne an injustice. For it is in fact the case that Ms Lavigne has produced perhaps the greatest anti-bullying ad possible, and for the widest audience.

With unflinching courage and raw honesty, she has chosen to portray the hideous, entitled psychopath. One would think Lavigne may have baulked at playing such a vile character. After all, some people cannot distinguish fact from fiction. Some might think the real Avril Lavigne was like the character she played, which of course is not the case. She is merely playing a fictional character in a made up song, just as she does in other songs. For example, her masterful ‘Skater Boy’ which shows the folly of a girl who rejects a boy for superficial reasons.

Even so, some people may not realise that Avril Lavigne is playing a role. They may make the mistake of seeing ‘Girlfriend’ as a glorification of stalking, violence and intimidation. Yet, they do not see the great humanitarian service Lavigne has done. By portraying this monster whose only redeeming feature is being pretty and cool, Lavigne, has created a poster child for the ‘Don’t Give Aliens An Excuse To Wipe Out Humanity’ campaign, coming soon to a school near you.

Therefore, we must stand and cheer, as 250 million YouTube viewers absorb this lesson of teen evil. We must urge all schools to show this video to all its students. Then we must nominate Avril Lavigne for a Nobel Peace Prize for what she has done for the cause of Anti-Bullying.