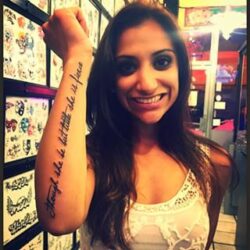 It used to be said you shouldn’t drink alone. Times have changed. If you’re going to get drunk and crazy these days, do it in private. Otherwise some bastard will be there filming it on his phone to make you look a goose on YouTube.

Two young drunks have shot to fame this week. Anjali Ramkissoon, a Miami doctor, was filmed attacking an uber driver and trying to trash his car. She’d tried to steal someone else’s ride and when the driver refused to take her home, she attacked him. A few days later, Mitchell Pearce, a Sydney footballer, was filmed at a party making drunken sexual advances at a woman, then pretending to hump a small dog.

The question is, who wins Drunken Pest of the Month for January? Let’s take a look at this heavyweight bout, Mitch vs Anjali, to see who has stuffed up the most. We’ll divide the scoring into categories. First, some context.

Mitch is a footballer, Anj is a doctor. While athletes aren’t known for their intellectual skills, doctors attend uni for at least five years and are supposed to be high status. Win to Anj.

Anj’s dad is a doctor too. Mitch’s dad is a renowned teetotaller and works as a football administrator. Let’s call it a tie.

Now for the actual bout – who is the bigger drunken pest this month?

Valliant effort by Mitch in peeing on the couch. But Anji’s ‘throw all the paper out of the car’ routine was a showstopper.

Unless you try to shoehorn the sexual harassment into this category, Mitch is a bit of a non-starter. Anj, on the other hand, tries to punch the Uber driver in the head and knee him in the groin. Another win for Anj.

A clear points decision to Mitch here. Kissed a lesbian then within seconds pretended to molest a small dog. Unless Anj’s attempt to knee the Uber guy in the balls counts as foreplay, Mitch has got this one in the bag.

While Mitch’s “I wanna fuck your dog” has merit, for sheer vitriol, he can’t compete with Anj’s order to the Uber driver to “Get the fuck in the car you piece of disgusting fucking shit.’  Both are a bit one dimensional in this category though – need to expand the old swear vocab for next time.

Mitch expects sex on tap from randoms who fall into his orbit. The high caste Anj thinks she can attack with impunity a low caste Uber driver. Not sure who wins this one.

A fail from Mitch. While he does harass both the woman and dog, as soon as he’s rebuffed there’s just no Plan B. Weak effort. Anj on the other hand attacks the driver, knowing he can’t hit back. Then when the driver calls police to report the assault, she taunts him that she’s a ‘five foot, hundred pound girl’ so no one will believe she’s the attacker. When the cops arrive, she gets off with tears and pleading. So while Mitch is merely oafish, Anj shows greater manipulative skills. Easy win for Anj.

AND THE WINNER IS

While Mitchell tried hard, he was simply outclassed on this occasion. A clear points decision to Anjali.

The guy who filmed Mitch and sold the footage for 60K, and the media outlets who bought it.  The one who filmed Anj gets off as he didn’t sell the footage.

Stay tuned for February’s bout in the YouTube Infamy cup. Let’s hope whoever it is can top Mitch and Anj.