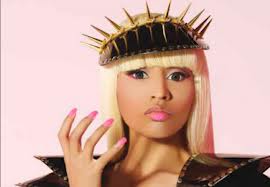 So, the new American Idol judge, Nicki Minaj has told last year’s judge, Steven Tyler, to go fuck himself. Nice way to hand on the baton.

What triggered this? Looks like Tyler had a shot at Nicki’s ability to judge rock music, saying she “would have sent [Bob Dylan] to the cornfield” if he he’d been on the show. Minaj then tweeted “That’s a racist comment. You assume that I wouldn’t have liked Bob Dylan??? why? black? rapper? what? go fuck yourself and worry about yourself babe.”

Tyler then said “I apologize if it was taken wrong, Nicki . . . but I am (no) racist. I don’t know where she got that out of me saying I’m not sure how she would’ve judged Bob Dylan. Maybe I spoke out of turn. But a racist I’m not, Nicki.”

You can understand Nicki Minaj being pissed at Tyler’s comment, but why play the race card? It’s just too easy and it makes no sense here. After all, who were Steve Tyler’s fellow judges when he worked on the show? Randy Jackson, a black American, and Jennifer Lopez, a Hispanic / Latino (or whatever the right term is these days). If  Tyler was a racist, why would he have worked with them?

I’ve only heard a couple of Minaj songs so I’m no expert, but they sounded nothing like rock to me. Tyler probably thought ‘what is this weird post-rock hybrid artist doing judging a rock talent show?’

He should have shut up in the first place, sure, but as for the charge of racism, Tyler could have replied “Nicki, I love Jimi Hendrix and he was black. We know Jimi Hendrix was a big fan of Bob Dylan because he covered ‘All Along the Watchtower’. So the reason I think you would kick Dylan off American Idol is not because you are black but because your music sucks and has nothing to do with rock. Your skin colour has nothing to do with it.”

Oh the race card. It’s so easy to play. As one internet poster wrote “For God’s sake quit apologizing for every little thing these hyper-race baiters want to accuse you of racism over, it’s absurd. There’s just about nothing you can say about a black person that someone won’t try to spin into racism today. You can’t criticize a black person at all, whatsoever, or you’re  racist. That’s a pretty nice protective mechanism to have isn’t it?”

Someone else wrote, “I think it’s racist to accuse people of racism for no reason! Why did you say that Nicki? White? Rocker? Go fuck yourself!”

The comment is right. Assuming Tyler is a racist because he’s white is racist in itself. It would be interesting to hear what Minaj would say about this, although you might just get another torrent of abuse rather than anything resembling rational thought and self awareness.

It’s just too easy to play the race card as a blanket means off warding off criticism. It’s childish and mentally lazy. It would be so much more impressive to hear Nicki say something like. “Steven, I’m not sure where your comments are coming from. My own music may be a little ‘modern’ for you (ahem), but if you’ll examine my IPod you’ll find a broad and eclectic range of artists,  and I admire talent no matter what the genre.”

But why bother with a fair and dignified response when you can tweet a teeny tantrum instead?