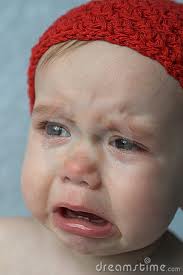 Just before he was hanged, the bushranger Ned Kelly was visited in jail by his mother. She told him to ‘make sure you die like a Kelly.’ He walked to the gallows calmly and kept his composure to the end.

The English queen, Anne Boleyn, showed similar dignity when publically beheaded in 1536. Under the greatest duress, she did not give in to displays of weeping and other histrionics.

There’s a lot to be said for keeping one’s emotions in check at such times. Although it can’t be easy, there’s a certain dignity even in the attempt. Which is why it’s a bit lame seeing the waterworks from some of the athletes in the 2012 Olympic Games. This has been the crying Olympics. Various competitors have been given to floods of tears after they’ve lost their events, been disqualified and so on. In one case, a fencer sat down in the ring for an hour staging a ‘crying protest’ over her last second defeat. She did have a case to make so I don’t mind the protest. But the crying? Lame!

Whatever happened to losing with dignity? I mean, these guys, what are they – five years old or something?

Sure,  they’ve been training for four years or eight years or whatever, dedicating their lives to it. They’ve put in thousands of hours of training. Then it all comes down to the big moment, they’re pumped full of adrenalin, the pressure peaks, and suddenly it’s all over. You can understand that they feel like bawling. They’re fully entitled to that emotion. It’s just a shame they can’t save it until a private moment on their own or with close friends and family. When the whole world is watching, it would be good to retain a bit of dignity, keep some stiff upper lip (as the English cliché goes) and take defeat on the chin ‘like a man’ as they say. And yes, that applies to the women too.

What’s the deal with all these tears? Maybe this is all part of the exhibitionism of the ‘reality TV’ age, when everything has to be put out there for the world to see. Who could forget ‘bubbly’ what’s-her-name from Master Chef whose perky, chirpy demeanour occasionally gave way to girly weeping when the pressure was on. Jesus, how would someone like that go in the high pressure environment of the restaurant?

If you’re going to compete in high level sport, you’ve got to be tough. That’s just part of it at the top level. How would it be if a batsman in the Aussie cricket team burst into tears when he got out 5 runs short of a century? How silly would a first grade AFL or rugby player look if he started bawling on the field when things got tough?

By all means have a cry – but save it for the dressing room. When the world is watching, a bit of the old stiff upper lip and a dignified handshake with the opposing team is what’s called for.

In the movie ‘Dancer in the Dark,’ the singer Bjork plays a young women sentenced to death for accidentally murdering some guy. Yes, the plot overall doesn’t make a whole lot of sense either, but it’s actually a very good film and the music is great.

The character played by Bjork is likeable enough. But at the end when she’s going to the gallows, she gives in to a fit of screaming histrionics. Well, Mr. Director, Lars Von Trier, I don’t know if this undignified display was your idea, or whether it was Bjork’s, but that is not the way we walk to the gallows around here. You, Bjork, and the 2012 Olympic athletes could learn a thing or two from Mr. Edward Kelly, bushranger, or HRH Anne Boleyn.

You didn’t win that Olympic gold medal? Your long journey’s over and you feel like a bit of a cry? Not good enough. Anne had a helluva journey too. From a country estate to the throne of England and finally the executioner’s square. Goddamn it, that’s a journey! But we never saw one tear from that girl.